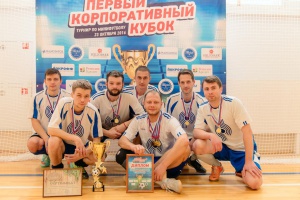 The first victory at the first corporate tournament
6 teams took part in football tournament. According to the regulations, teams were divided into 2 groups with 3 participating teams in each group. From the very beginning of the match and up until the last goal our team proved to be an absolute leader of the tournament.


The team was awarded with a diploma, cup, medals and trophies.

The main purpose of “ARMY” forum and exhibition is to create conditions for the effective search of innovation researches, developments and technologies for the state defense and security and also in order to conduct further introduction of promising samples of armory and military equipment. It was established to increase the effectiveness of life activity, construction, preparing and using Armed Forces, lower organizations and Russian Ministry of Defense organizations, provision of these organizations with supplies, goods and general services.

More than 500 thousand people have visited grounds of International military and technical forum “Army-2016” during six days, thus exceeding many of same theme events around the world and confirming its international status. More than 70 states had their delegations. Around 800 industrial companies exhibited their production and presented more than 7000 samples of armory and military equipment, more than 100 samples took part in live demonstrations in order to show possibilities of Russian armament.

In the open-air area of the forum the factory for the first time has demonstrated mobile ground post of remote control over unmanned flying vehicle “Orlan-10E” on the base of UAZ “Patriot” automobile. The article is a composite part of multifunctional complex with UFV “Orlan-10E” and provides remote control over UFV from the operator automated workplace, reception of meteorological data in target area from UFV, displaying of targets on the screen of operator automated workplace, transmission of meteorological data and targets to command posts.

On the first day of the exhibition general director of State Corporation “Rostec” Chemezov S.V. and general director of holding JSC “Roselectronica” Kozlov I.I. have visited the factory stand. Representatives of different structures of Russian Ministry of Defense and foreign companies showed great interest in the production.

Specialists of JSC “Radiozavod” took part in the conferences that were conducted during the exhibition. Among them are the following: “Artillery missile armament. Development prospective”, “Language competence of military men and specialists of military and technical cooperation as a universal tool of interaction”, “Improving performances of Land Forces and Air Forces Equipment due to innovation developments and possible modernization ways, their ability to be realized”.

International military and technical forum “Army-2016” is an effective ground for maintaining factory brand, meetings and negotiations with business partners, prospective customers and for discussion of further ways of interaction.

Radiozavod conducted excursion for pupils of Penza Lyceum of information technologies № 73
Excursion at the factory is a good opportunity for pupils to see how industrial production is organized, what kind of equipment is used; it is a chance to get acquainted with grown-up professions and “try them on”.

During the excursion special attention was paid to the interests of pupils: peculiarity of instrument engineering and electronics.
Pupils have got acquainted with the technological processes on the big enterprise by the example of work of three workshops: framework production and press forming workshop, assembling workshop and machining workshop.

We are proud of our employees!
Leading specialist of NIO-1 STC, Petr Mokshanov , was awarded with a medal of the order For the Service to Homeland of the second degree for big contribution into Homeland defense, success in maintaining high combat readiness of central bodies of military management, of military units and organizations included into types and corpses of Armed Forces of the Russian Federation.